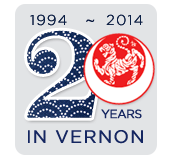 Karate originated as a system of self-defence on the island of Okinawa. It was a form of hand to hand combat that was developed over many centuries by the Okinawans. They were forced to train in secrecy as a result of a ban on weapons imposed by the rulers. The martial art originally known as “te” (meaning hand) evolved into “karate” (meaning empty hand). Karate is a striking art that consists of blocking, punching, kicking and striking.

In 1922, Okinawan karate master Gichin Funikoshi travelled to mainland Japan to give a demonstration. He was invited to stay where he developed the karate style known as Shotokan. The name Shotokan means “Shoto’s School”. Shoto is the name that Funikoshi used to sign his calligraphy. Karate soon became very popular through out Japan and eventually all over the world. Modern karate is a highly dynamic physical art that develops balance, strength and agility. It is also an excellent method of self-defence. Karate techniques have been studied and refined over hundreds of years with the purpose of developing an efficient and effective system for an individual to protect themselves from an attack. Traditional karate practiced in the world today places an emphasis on character building.